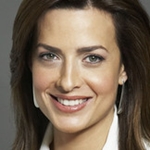 Former Ten News presenter Helen Kapalos (pictured) has been reported as the new host for Today Tonight in Melbourne and Sydney.  She replaces Matt White who announced his departure from the program late last year.

Kapalos was dismissed from Ten News on the eve of a planned holiday in November last year as part of the network’s round of redundancies.

News Limited reports that Seven had approached Kapalos soon after her exit from Ten.  Her new role at Seven will also include field reporting.

For NSW viewers it will be the first time in several years that she has appeared on local screens.  Before joining Ten in Melbourne in 2006 she worked for Nine in Sydney and prior to that at NBN in Northern NSW.

During her holiday after leaving Ten, Kapalos visited New York where she volunteered as part of the relief effort following Hurricane Sandy.  Since returning she has also made her acting debut, as a news reporter, in the short film Caravans For Refugees.

It is shaping up to be a competitive year in television news and current affairs.  As well as a revamped Today Tonight, Seven has recently signed up Derryn Hinch as a commentator for Seven News, Sunrise and Sunday Night.

Meanwhile, the Nine Network has expanded its news coverage to include a 3.00pm weekday bulletin, Nine News Now.

The ABC is expected to launch a new 5.30pm news bulletin on ABC1 after it was reported in the press late last year, and Ten may yet re-enter the breakfast news arena despite its failed Breakfast venture last year.

Permanent link to this article: https://televisionau.com/2013/01/helen-kapalos-joins-today-tonight.html