Sophie swaps Sex for study!
Sophie Lee (pictured) has found that there is life after Sex.  With the controversial series now wrapped up for the year — and with a likely return in 1993 — Lee has taken a temporary break from television to study acting at Sydney’s Actors’ Centre.  “I really enjoy it… I think I’m the happiest I’ve been all year,” she told TV Week.  “This course is not about who’s the best or how many marks you can get out of 10.  It’s about what you’re doing for yourself and how much effort you want to put in.”  Lee will return to Melbourne later in the year for production of the next series of Nine‘s The Flying Doctors.  Although her contract with Nine expires at the end of the year, she is non-committal about her future, and laughs at a recent report that touted her as a possible replacement for Jana Wendt.  “That was funny, wasn’t it?,” she said.

Soaps fight over Kieren Perkins
Olympic gold medalist Kieren Perkins is now topping TV’s most wanted list, with two networks vying for his services.  The producers of Seven‘s Hey Dad! and Home And Away have approached Perkins’ management about the possibility of a guest appearance in their respective shows.  A spokesperson at Seven said that fan mail had been arriving for Perkins after his recent TV Week front cover with Home And Away star Rebekah Elmaloglou, with viewers asking when he was joining the show.  Network Ten is also believed to be chasing the swimming champion, who won one Gold and one Silver medal at the recent Barcelona Olympics, for a guest appearance in either Neighbours or E Street. 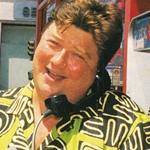 Just born lucky
Jonathan Coleman (pictured), formerly of Simon Townsend’s Wonder World, Saturday Morning Live and The Jono And Dano Show, flew to Los Angeles for a holiday and wound up co-hosting a national game show.  Coleman, who has been based in the UK for two years with various high profile radio and TV jobs, will soon be seen across the US on the game show Born Lucky with former American Wheel Of Fortune host Bob Goen.  “My agent in Los Angeles sent me to meet producers at Stone/Stanley Productions,” he told TV Week.  “Then they introduced me to the executives of (cable channel) Lifetime and told me that if I delayed my flight for a day we could do a screen test.  The next day I was told I got the job.  One of my dreams was to work outside Australia, and in the past few years I’ve been lucky.”

Lawrie Masterson: The View From Here
“Life is so confusing sometimes that it becomes all too much for simple folk from the country, such as my good self.  For instance, I was just starting to come to grips with an election campaign — there’s one happening here in the Rust Belt — without TV advertising.  This had been banned early this year when the Federal Government inserted the Political Broadcast and Disclosures Act as Part 3d of the Television and Broadcasting Act (now you can see what I mean about confusing).  We were told this was for our own good, because it would nip in the bud any potential campaign corruption.  But, just as the Victorian campaign was getting into full, non-electronic swing, in steps the High Court and upholds a challenge to the new law by eight television stations and the NSW Government.  And before you could say “bull in a china shop” or “New Zealander on the poverty line” or even “guilty party”, there we were being bombarded again, while executives from the commercial stations enjoyed some rare jollity.”

Program Highlights (Melbourne, September 13-19):
Sunday:  Veteran movie reviewer Bill Collins is this week’s special guest on Sunday Afternoon With Peter Ross.  Afternoon sport includes the VFA Preliminary Final (ABC), the Major Semi-Final of the Winfield Cup (Nine), the Sandown 500 (SBS) and highlights of the AFL finals (Seven).  Nine’s Our World presents Street Life, a special from Melbourne Extra, showing the plight of Melbourne’s homeless, with Des Dowling spending a week living on the streets with just $50 in his pocket.  Sunday night movies are Internal Affairs (Seven) and Always (Ten), up against mini-series And The Sea Will Tell (Nine).

Tuesday:  In My Two Wives (Nine), Geoff (Peter Fisher) and Robyn (Linda Newton) decide that they don’t want any more children, and Robyn suggests Geoff has a vasectomy.  In The Flying Doctors (Nine), Clare (Beverley Dunn) has a secret admirer over the radio — who turns out to be blind and with a possessive brother.  In Sylvania Waters (ABC), Noeline confronts her heavy drinking and confesses to having a problem with alcohol.

Wednesday:  ABC winds up its nightly highlights coverage of the Paralympic Games from Spain.  ABC presents the first of a two part documentary, Without Consent: Every Woman’s Fear, about the impact of sexual violence on the lives of Australian victims.  The program also presents the viewpoint of the rapists and other offenders, to try and gain an insight into why it happens.

Saturday:  In Bony (Seven), when a challenger for the annual Beach King title is found dead Bony (Cameron Daddo) and Frank (Christian Kohlund) are called in to investigate.