‘Why I must quit!’
All Together Now star Rebecca Gibney (pictured) says there has hardly been an hour when she hasn’t questioned her decision to quit the Nine Network sitcom.  “For me, the hardest thing will not be leaving behind the money, but the people I’ve worked with,” she told TV Week.  “And I feel that the show is like a baby to me because I was there from the beginning of it all.”  Gibney’s recent marriage to rock star Jack Jones and commitment to the World Vision organisation are major factors in her decision.   As soon as she finishes taping All Together Now at the end of this month, Gibney will be on a plane to Zimbabwe to work on a documentary for World Vision.  She is also looking forward to taking a break after returning from Zimbabwe as she has been in almost constant work since joining The Flying Doctors in 1986.  “My life is not going to end if I don’t work for a while,” she said.

Married… with problems!
The E Street wedding of CJ (Adrian Lee) and Toni (Toni Pearen) will be soon followed by drama and emotion.  CJ, who has been blind since a car accident, miraculously regains his sight in time to see his bride walk down the aisle — but no sooner will the happy couple have returned from their tropical honeymoon then the cracks will appear for the young couple.  CJ is set to develop a drug problem, while Toni will have an affair with Sam Farrell (Simon Denny).  The dramatic storyline will mark Pearen’s departure from the series.  “When I first heard about the storylines, I thought it was all quite shocking,” Pearen told TV Week.  “Adrian and I thought it was all going to be rosy.”

The family plot
An upcoming episode of Nine‘s All Together Now will be very much a family affair.  Story editor Alan Hardy and wife, writer Galia have scripted an episode based on a storyline devised by their daughter Marieke.  The 16-year-old came up with the story idea during school holidays and Alan presented it to head writer Philip Dalkin, who gave it the go-ahead.  Marieke, who will appear in the new series of The Flying Doctors, is a keen writer but told TV Week, “This is the first thing I’ve been paid to do.”

Lawrie Masterson: The View From Here
“Last week’s reshuffle at Channel Nine must have been anything but funny as far as the Beyond International Group — producers of Australia’s steamiest soap, Chances — are concerned.  Now banished to 11.00pm, behind back-to-back episodes of Married… With Children, “specials” such as Pallas and Jim Waley‘s Nightline, Chances must be on very uncertain ground.  Networks invariably can come up with all manner of logic behind such moves and reassurances that they do not mean the demise of the show in question.  But I can think of only one other Australian soap which was banished to the wilderness and made a spectacular comeback… and that involved a change of networks.” 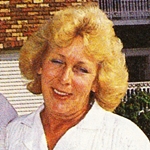 Tuesday:  In All Together Now (Nine), Thomas (Steven Jacobs) goes out all to impress a wealthy girl (played by Susan Ellis) at school.  Dance stars David Atkins and Sheree Da Costa guest star in GP (ABC).  With Chances now bumped to 11.00pm, Nine returns The Flying Doctors with new episodes at 9.30pm.   In Sylvania Waters (ABC), Noeline (pictured) arranges a party for her women friends and hires a male stripper — while the male members of the family are unimpressed.

Wednesday:  In Acropolis Now (Seven), a know-it-all Swede falls in love with Effie (Mary Coustas).  In E Street (Ten), Elly (Diane Craig) and Bob (Tony Martin) decide to have the baby.  ABC presents a one-hour special The Big Australians, focusing on the poor nutritional habits in the Australian community.

Thursday:  In Bligh (Seven), MacArthur (William McInnes) is encouraged to establish a casino.

Friday:  The Bookshow (SBS) features an interview with author Germaine Greer.  Burke’s Backyard (Nine) presents a special edition from England, including a guest appearance by celebrity gardener and naturalist David Bellamy.  Seven crosses live to the Sydney Cricket Ground for the AFL match between Sydney Swans and Richmond.

Saturday:  Wide World Of Sports (Nine) includes horse racing from Sydney and Melbourne, highlights from the Brazilian 500cc Grand Prix, highlights of the One Day International between England and Pakistan, previews of the US Open tennis and the NSW State Aerobics Championships.