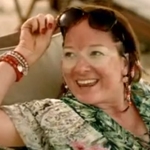 The Nine Network‘s long-anticipated biopic Howzat! Kerry Packer’s War, inspired by the success of ABC‘s Paper Giants: The Birth Of Cleo, has given the network a ratings hit as it rides the wave of a post-Olympic ratings boost.

The first of the two-part mini-series — the second installment appears next Sunday — scored 2.097 million viewers (OzTAM, 5 cities), making it the most watched Australian drama this year.

But while media magnate Kerry Packer, played in Howzat! by Lachy Hulme, is the focus of the series which tracks his battle with the cricket establishment, an unlikely hero from the series almost dominated social media discussion in her own right.

Mandy McElhinney, who played Packer’s secretary that bore the brunt of some of his dramatic outbursts, became a hit on Twitter as viewers recognised her as ‘Rhonda’ (pictured) from the series of TV commercials for insurance company AAMI.

#Rhonda was as big a hit with the Twitterers as #Howzat was, giving AAMI the best advertising it never paid for.  Lots of viewers commented on the flirty conversation between ‘good driver’ Rhonda and Balinese bartender Katut that features in the current campaign, and also made comments on her ‘good braking foot’ from a previous commercial, while defending Packer’s secretary ‘Rose’.

McElhinney, who has also starred in Comedy Inc and appeared in Kath And Kim, will be back on screen in one of the lead roles in ABC’s upcoming Paper Giants sequel based on the 1980s battle between Woman’s Day and New Idea magazines.

Perhaps Katut can be signed on for a cameo?

Permanent link to this article: https://televisionau.com/2012/08/howzats-unlikely-hero.html