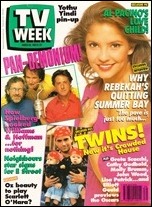 Why Rebekah’s quitting Summer Bay
After two years playing hapless teenager Sophie in Home And Away, Rebekah Elmaloglou (pictured) has decided to leave the series.  The 18-year-old will tape her final scenes for the show in September and hopes that life after Home And Away will be a little less frantic.  “There is definitely life after Home And Away,” she told TV Week.  “It’s been great and I’ve learned heaps, but the pace is just too much and I need a break.  Come September, I plan to do a lot of travelling overseas and I might even do a pantomime in London.”

John plays by new rules
”People tend to see me as Rafferty and nothing else,” actor John Wood tells TV Week.  “So I’m pleased that Dearest Enemy is about to be screened – it might break down that feeling a bit.”  The three-time TV Week Logie winner stars in the series alongside Linden Wilkinson, Bruce Spence, Frank Wilson and Vic Hawkins.  “I’ve been lucky in that in the two major series I’ve done, I’ve had wonderful female co-stars – Catherine Wilkin in Rafferty’s Rules, and now Linden.”  But with production of Dearest Enemy completed some time ago – and despite a current stage role in Sydney – Wood can’t get back into television.  “A couple of years ago, I was the most outstanding actor on television.  Now I can’t get a bloody job in television.  It’s amazing,” he laughs. 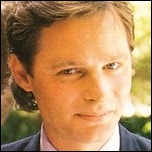 Richard insures against handbag attacks
As Terry Sullivan in the long-running series The Sullivans, actor Richard Morgan (pictured) became one of Australia’s most recognisable faces – something he hated, and was made more difficult when Terry started beating his wife.  “I copped a few handbags across the face in supermarkets from women who couldn’t tell between fantasy and reality,” he told TV Week.  Now, a decade later, he is content to enjoy his anonymity working in the insurance industry and appearing only in roles that appeal to him, such as the mysterious Michael Tranti in an upcoming episode of Chances.  Tranti is a married businessman who develops an unhealthy infatuation with advertising executive Angela (Patsy Stephen) when he enlists the advertising agency for his company’s new campaign.  Chances is Morgan’s first television appearance in 18 months, his last TV role being on the Seven Network drama series Skirts. 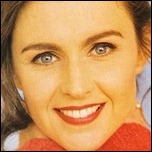 Australian actress Christine Harris (pictured), with television credits including The Young Doctors, Carson’s Law, Prisoner, Neighbours, Chances and ABC mini-series Darlings Of The Gods, is in the running for a major overseas role – the part of Scarlett O’Hara in the sequel to the cinema classic Gone With The Wind.

Former Neighbours star Andrew Williams is soon to begin a 13-week guest stint in Ten’s other prime time drama, E Street. He will make his on screen debut in June.

Meanwhile, the producers of E Street are now developing a drama-sitcom project featuring pop group The Teen Queens. The video clip of the group’s debut single, Be My Baby, appeared on E Street recently. The pilot for the new series, to be set in Bondi Beach, is to be filmed soon.

There is speculation that the Nine Network may give the flick to Clive Robertson and The World Tonight to make way for a new show to be hosted by Richard Wilkins.

Former Chances star Cathy Godbold, whose role as leukaemia victim Meg Bowman in Home And Away comes to a tragic end on screen this week, has appeared in a pilot episode of a proposed new sitcom, Newlyweds.

’The Minister for Information and Immigration… has been the target for strong press criticism in this immigration venture’ .  With thousands of higher-living nationals awaiting entrance – English, Nordic types and Americans – who can offer this country ideas and culture, it is little wonder that this project has been the centre of bitter controversy.  Let us hope that immigration of the future will be planned deliberately and intelligently and offer more opportunities to the people of our own stock.’

“Those quotes (above) are not from a speech by someone from the extreme right of South African politics.  They are taken from a Cinesound Review newsreel, made right here in Australia.  The government minister to whom the voice-over referred was the late Arthur Calwell, who held the Information and Immigration portfolios in the Chifley Government between 1945 and 1949.  The newsreel footage is part of Alec Morgan’s film Admission Impossible: The Story Behind The White Australia Policy.  A Film Australia production, it screens on ABC this week.  The film, narrated by former Four Corners reporter Paul Barry, is a combination of archival film and interviews with immigration officials.  It paints successive Australian governments as underhanded and racist.  Admission Impossible forcefully supports Alec Morgan’s contention that Australia as an egalitarian nation embracing multiculturalism was – and is – a myth.” 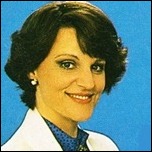 Tuesday:  Nine presents delayed coverage of the presentation of the 64th annual Academy Awards, hosted by Billy Crystal at the Los Angeles Music Centre.  Nominations for Best Picture are Bugsy, Beauty And The Beast, JFK, Prince Of Tides and Silence Of The Lambs.

Wednesday:  In Home And Away (Seven), Meg (Cathy Godbold) needs all her energy to live her final days to the full.

Thursday:  In ABC crime drama Phoenix, Lochie (Andy Anderson), frustrated by his desk jockey status, finally has the chance to lead a raid but it goes embarrassingly wrong.

Friday:  Documentary series A Big Country (ABC) looks at Tim Kelly, former champion rodeo rider – with the hard-drinking and hard-living life-style that came with it – whose life has changed since gospel preachers called him to God.  Now, Kelly is a sincere and gentle man whose wife, a former barmaid and bikie, has also converted to the Christian faith.