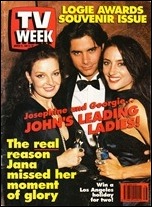 Now cop this!
The 34th annual TV Week Logie Awards, held at Melbourne’s Radisson President Hotel, gave the audience and viewers some surprises.  After the show’s opening production number – a parody of Michael Jackson’s Black Or White, recalling the old days of black and white television, featuring Cathy Godbold (Home And Away), Nick Giannopoulos (Acropolis Now) and Bruno Lucia (All Together Now) – introduced to the Logies stage were three TV veterans who hadn’t appeared on screen together for years.  George Mallaby, Alwyn Kurts and Leonard Teale, all from the halcyon days of the pioneer Australian drama Homicide, got the most rousing welcome of all those that appeared that evening.  But the on-stage reunion of the Homicide trio wasn’t to be the last big surprise of the night – as for the first time in Logies history the winner of the Gold Logie, Jana Wendt, was not present to accept her award. 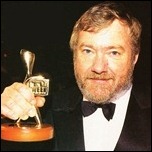 Jana – What really happened…
It was the biggest disappointment of Logies night that Jana Wendt, the winner of the Gold Logie for Australia’s most popular television personality was not present to accept the award personally.  TV Week had about a week’s prior knowledge that Wendt was unlikely to attend – being told that her commitments to A Current Affair plus the fact that daylight saving was still in place in some states that throws production schedules into havoc and meant that Wendt had to stay at Nine’s Sydney studios into the evening in case a major news story broke.  Nine had offered to work around these logistics if they could be assured that Wendt had won the Gold Logie.  TV Week, in the interests of maintaining the security of the Logies results, decided that such information could not be released to the network in advance, even in the strictest confidence.  Wendt’s Gold Logie was accepted on stage by her boss Peter Meakin (pictured).  “I’m sorry she’s not here.  She’s sorry she’s not here,” he told the audience.  “Jana, as she always does, put the program first.  I know she regrets not being here.  It’s a shame.” 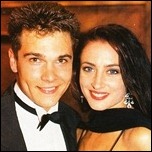 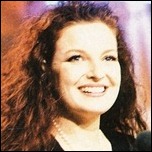 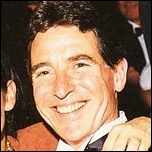 Briefly (at the Logies):
As well as Jana Wendt, there was another non-appearance on Logies night – Diana Ross.  Despite a planned live cross from Queensland, Ross refused to appear because, Seven say, she didn’t want to appear live after her concert, saying her looks wouldn’t be up to scratch.  When the network offered to pre-record her segment, she still declined.

At the post-Logies party Bob Campbell, managing director of the Seven Network, approached Derryn Hinch (recently axed by Seven) for a chat.  “That’s the first time we’ve spoken since he sacked me,” a surprised Hinch commented.  “I bear no grudge.”

Wheel Of Fortune host John Burgess had to attend the pre-awards cocktail party in a floral shirt because his luggage had ended up in Queensland – while Lateline host Kerry O’Brien found his seat on the plane to Melbourne had been taken, so he had to fly with the crew in the cockpit.

There was lots of buzz around the room about the new-look The Flying Doctors, soon to commence production, and the news that former Neighbours star Elaine Smith had just joined the cast list. 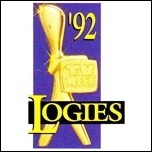 Lawrie Masterson: The View From Here
”No doubt you are aware the ABC’s current affairs flagship Four Corners has joined an elite band in the TV Week Logie Awards’ Hall Of Fame.  And you could not help but be more than aware that Four Corners also has been the oven in which a political potato was heated up – at microwave speed, on high.  Personally, I don’t feel any discomfort about it all, other than I think the timing could have been better.  If the Four Corners program Winners And Losers had been screened on 22 March instead of 2 March, then I wouldn’t be writing this.  As it’s happened, certain people who don’t need an excuse to become hysterical about some aspect of each year’s Logies now could see the award to Four Corners as an endorsement of the program’s – or the ABC’s – stance against the goods and services tax (GST) component of Opposition Leader Dr John Hewson’s Fightback package.  Rather than recognising a specific achievement, the TV Week Logie Awards’ Hall Of Fame is an award for sustained excellence over many years – coming up 31 years in the case of Four Corners.  And what a consistently excellent program it has been.  Since its debut in 1961 it has won eight Logies, nine Walkley Awards for journalistic excellence, two United Nations Peace Prizes and two gold medals at the New York Film and Television Festival.  Four Corners thoroughly deserves this accolade.  Congratulations to those who have maintained its high standards over the years.  Four Corners also deserves this: the Winners And Losers program was a blot on its copybook.  On the morning of the program’s air date I’m sure I heard reporter Frank McGuire say in a radio interview that it would prompt howls from both sides of politics.  Since then I have heard only one side baying, and surely that says it all about balance.”

Program Highlights (Melbourne, March 22-28):
Sunday:  Afternoon sport includes the Gold Coast Indy Classic (Nine), Benson And Hedges World Cup – Second Semi-Final (Nine), AFL – Adelaide versus Footscray (Seven) and Five Nations Rugby – Wales versus Scotland (Ten).  While on ABC’s arts program Sunday Afternoon With Peter Ross, performer Reg Livermore is this week’s special guest.  There is only one Sunday night movie this week – The War Of The Roses (Ten) – while Seven presents the Royal Variety Performance and Nine has the night session of the second semi-final of the Benson And Hedges World Cup cricket live from Sydney. 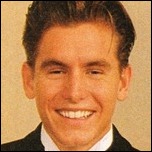 Wednesday:  Nine has afternoon coverage of the final of the Benson And Hedges World Cup cricket, live from Melbourne, although Melbourne viewers are barred from live coverage of the evening session’s play, instead receiving only a one-hour highlights package at midnight.

Thursday:  The ABC series on health and well-being, Everybody, returns for a second season – hosted by former Midday reporter Lisa Forrest.  In Acropolis Now (Seven), will Memo (George Kapiniaris) make a fortune on a game show?

Saturday:  With no live local sport during the day there is lots of C-rated (children’s programming) during the day across the three commercial networks – mostly repeats – including Round The Twist (Seven), Pugwall (Nine), Goodsports (Nine), Bush Beat (Nine), KTV (Nine), Look Who’s Talking (Nine) and The Henderson Kids (Ten).  Seven crosses again to Sweden for Davis Cup tennis late in the evening, while Ten has delayed coverage of the NBL Preliminary match between Sydney Kings and the Brisbane Bullets.