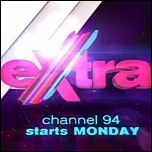 Inevitably when one starts the other one follows.

Now it appears Nine is set to follow suit with the launch of Extra.

The new channel is now broadcasting a test signal on Nine’s digital channel 94 in Sydney, Melbourne and Brisbane.  It is not clear if the channel will be expanded to include affiliate WIN – covering various regional areas as well as Perth and Adelaide – and the Nine-owned stations NBN and Nine Darwin.

Extra so far promises “the very best in home shopping and so much more of what you’re looking for”.

News of the Nine Network’s new cash-driven venture comes after reports that the three commercial networks are again handed financial concessions from the Gillard government in the form of more licence rebates worth tens of millions of dollars.

Permanent link to this article: https://televisionau.com/2012/03/now-for-something-extra.html