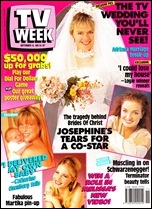 The TV wedding you’ll never see!
Don’t let the picture of Penny Cook in a wedding dress deceive you.  Despite the smiles of the happy bride, all is not well in the lead up to the marriage of Beth (Cook) to Dr Steve Harrison (Michael O’Neill) in GP, as she thinks about her faith, commitment to the marriage and Steve’s desire to have a family.

Natalie’s out!
The producers of Chances have dropped a bombshell on one of its leading stars by not renewing her contract.  Natalie McCurry, the former Miss Australia, is being dumped from the ailing series following her refusal to appear in frontal nude scenes.  She will tape her last scenes with the series in October but will continue to be seen on air until the end of the year.  Meanwhile, producers have also dumped another original cast member, Cathy Godbold, who will also tape her last scenes in October.  Chances, which has struggled in the ratings since its debut earlier this year, is expected to be re-launched with an emphasis on guest stars rather than ongoing characters.

Tracey signs for Beyond 2000
Despite press reports that Tracey Curro (pictured) was set to replace Jennifer Keyte as the newsreader on Seven’s Tonight Live, she has now signed up to join the team of Beyond 2000.  She will be replacing Maxine Gray who has decided to leave the program to spend more time with her family.  Curro’s move to Beyond 2000 follows an unsettled period where she was dropped from reading the news at Network Ten in Melbourne and the legal action that followed.  But she is excited about her new career move.  “Absolutely.  It’s got to be one of the best jobs in television,” she told TV Week.  “It’ll be hard work with very long hours, but it beats driving through traffic to work every day.”

Briefly…
The writers of Brides Of Christ have now moved onto their next project which begins production this week.  The Leaving Of Liverpool is a mini-series set in England and Australia in the years 1951 to 1953, telling the story of two Liverpudlian children who are torn from family and country and shunted to Australia as part of a child migrant program.  The series will star John Hargreaves, Bill Hunter, Martin Jacobs, Frank Whitten and newcomers Christine Tremarco and Kevin Jones. 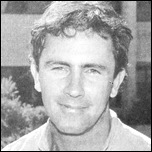 Actor Nicholas Eadie (pictured), best known from TV roles in Cop Shop, The Henderson Kids and the mini-series Vietnam, is heading to the US because, at 32, he says he is too old to be an actor here.  “Australian television is going through a Kylie and Jason syndrome,” he said.  “If you’re over 25 in this country, you’re over the hill.”

The return of former Rafferty’s Rules star John Wood to our screens has been delayed due to industrial disputes at the ABC.  Production on the sitcom Dearest Enemy, which features Wood along with Bruce Spence, Linden Wilkinson and Frank Wilson, has stalled leaving all but one episode completed.  With the producers and Wood now with other commitments, completion of the final episode is scheduled for November and the series, which was due to air next month, should now appear in the new year. 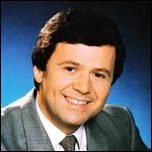 John Laws says…
”Since taking over the Midday show, there have been claims that Ray Martin (pictured) has gone a bit soft and, in the process, relinquished the razor-sharp intensity of his news and current affairs days.  Not so!  The “old” Ray Martin is still there, and any doubters should have been watching when he interviewed Prime Minister Bob Hawke following the first Kerin Budget, and in the wake of the NSW gun laws uproar.  In years to come we may well look back on this particular interview as the one that signalled the beginning of the end of the Prime Minister.  Sad to say, it was an interview that cut him apart.  Martin was aggressive without being rude.  He pressed for answers where other interviewers would have shirked the task, and he maintained the pressure as forcefully as he could.  It was the PM who buckled.”

Monday:  In Neighbours (Ten), the search for Harold (Ian Smith) continues – and in A Country Practice (Seven), Lucy’s (Georgie Parker) behaviour is affected by IVF treatment. 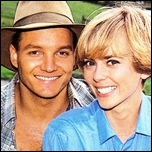 Tuesday:  One-time Gold Logie winner Hazel Phillips guest stars in GP (ABC).  In Chances (Nine), the father of Charlie’s (Kimberley Davenport) baby is finally revealed, and passion overcomes Alex and Paris (Jeremy Sims and Annie Jones, pictured) when they admit their love for one another.  Beyond 2000 (Seven) reports on a new low-fat chocolate designed to keep you warm.

Friday:  The SBS series Connections presents Victor Chang – King Of Hearts, documenting the life of Dr Victor Chang, heart transplant surgeon who was gunned down in July, and the progress he had made in perfecting the artificial heart.