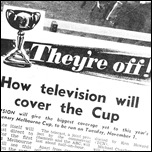 The running of the 100th Melbourne Cup, on 1 November 1960, was a significant one for television. It was the first time the race was telecast direct to Sydney in a rare co-operative effort between Sydney’s three TV channels – ABN2, ATN7 and TCN9. The direct telecast, scheduled to run for about half-an-hour, included the race, the presentation of the Cup and interviews with the winning jockey, trainer and owner.

ABC’s Michael Charlton hosted the coverage and the commentary of the race was given by ABC’s Joe Brown – whose commentary was also broadcast through ABC radio nationally and overseas through Radio Australia – with TCN9’s Ken Howard presenting the post-race interviews. The telecast was directed and produced by Ron Davis of Melbourne’s GTV9.

Meanwhile, Melbourne viewers – denied the chance to see the race live on television until the late 1970s – would have to make do with delayed coverage of the race during the evening news bulletins on ABV2, HSV7 and GTV9. The film of the race would also be shown during In Melbourne Tonight (GTV9) and Sports Cavalcade (ABV2) and after The Bobby Limb Show on HSV7. 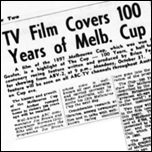 HSV7 presented a one-hour Cup Eve special. The program, hosted by Michael Williamson with racing commentator Bill Collins, included newsreel footage of past Melbourne Cup races, dating back to the 1930s, and covered the important races leading up to the current event. The program also featured commentators from local and interstate newspapers with their selections for the day’s races. 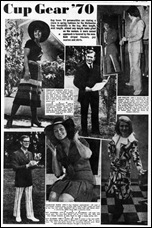 Ten years later, the 1970 Melbourne Cup was televised live to interstate viewers but continued to be a delayed telecast within Victoria. ABV2 and ABC regional stations in Victoria presented delayed coverage of the race at 6.00pm and again at 8.00pm. GTV9, which presented a ten-minute Cup preview the night before, also had its delayed coverage at 6.00pm. HSV7 – always keen to get one above its main rival – scheduled its delayed broadcast for 5.55pm. All four Melbourne channels featured the race in their main evening bulletins.

By the time 1980 came around, the telecast of the Melbourne Cup was a major television event. The Ten Network, presenting the Cup coverage for the third year running, started its day’s coverage with a 90-minute preview before crossing to Flemington Racecourse for six hours of live broadcast. The host broadcaster, ATV10, had seventeen cameras placed at strategic points around the track. Their coverage was headed by Phil Gibbs, with races called by Clem Dimsey, with the six-hour telecast also featuring Ray Warren (from TEN10 Sydney), Rob Readings (TVQ0 Brisbane) and John O’Neil (SAS10 Adelaide). Everyday co-host Annette Allison (pictured, below) hosted the fashion and celebrity interviews. 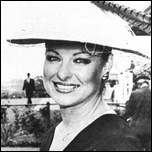 Network Ten’s 1980 coverage was also relayed direct to New Zealand, and remote areas in Australia saw the coverage via ABC through a special arrangement made with Ten. With nationwide coverage, it was at the time reported to being the largest sporting telecast ever undertaken in Australia.

Network Ten continued to cover the Melbourne Cup every year up until 2001. This year’s Melbourne Cup will be broadcast live tomorrow (Tuesday 2 November) through the Seven Network.