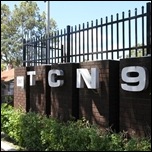 For Sydney’s TCN9, it’s the end of an era as the famous “TCN9” lettering (pictured, right) that has appeared outside the station’s Willoughby premises for fifty years has been replaced.

According to Nine’s Facebook page, the old signage has been taken away for cleaning and preservation, while a shiny new “9” logo (pictured, below) now takes its place.

TCN9 has occupied the Willoughby site since its inception in 1956 – although the station’s earliest programs emanated from a church hall in Surry Hills as the Willoughby site was yet to be finished.  It is the only one of Sydney’s three commercial channels to still be based at its original premises.  TEN10 moved out of its original North Ryde studios back in the early 1990s, while ATN7 has moved out of its Epping studios to the inner suburb of Redfern, with news operations based in the Sydney CBD. 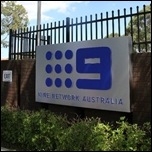 Thanks to The Spy Report for the heads up.

Permanent link to this article: https://televisionau.com/2010/11/the-signs-they-are-a-changin.html