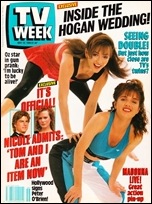 ‘We’re not joined at the hip’
Neighbours twin co-stars Gayle and Gillian Blakeney (pictured) might look alike and share many similar interests but still stress that they are very different.  “We’re not joined at the hip.  We’re individuals,” Gayle told TV Week.  “People think that because we look alike we’re alike in everything we do and say.”  But they do concede to have had a number of uncanny experiences – sometimes one will start a sentence and the other will finish it off.  “We can pre-empt what the other is thinking and our moods follow suit.”

‘I’d be fibbing if I said I didn’t miss it’
Former Coast To Coast presenter John Mangos has told TV Week about his disappointment about Graham Kennedy’s decision not to continue with the show after the end of 1989:  “I idolised Graham.  He was my boyhood hero and that’s why i left the States.  There were very few job positions I would have left that job for, and one of them was the chance to work with my hero.  It took the first few months for us to find each other and after we did, we had a good thing going.  I’d be fibbing if I said I didn’t miss it.”  Since the end of Coast To Coast, co-host Terry Willesee has now moved across to the Ten Network to present Good Morning Australia with Kerri-Anne Kennerley, and Mangos has stayed at Nine to present its Sunday night documentaries with the opportunity to make his own for the network. 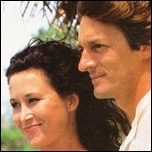 Oh, what a lovely war!
The Nine Network mini-series The Private War Of Lucinda Smith is not your usual wartime drama.  The two-part series, starring Nigel Havers, Linda Cropper, Andrew Clarke and Vincent Ball, is an unashamed bawdy romp about a romantic love triangle in the South Pacific in 1914-15 when the outbreak of war turns friendly rivals for Lucinda’s affections into friendly enemies.  “It’s a good old Boys’ Own adventure story with plenty of romance, comedy and sex and practically no violence – perfect, really,” according to Havers (pictured, with Cropper).  “We enjoyed ourselves immensely making it, and I think Ray Alchin (the director) has a lot to answer for.  He never took anything seriously.”

Briefly…
Former The Flying Doctors star Peter O’Brien has scored the lead role in an upcoming American adventure film, The Diamond Triad.  O’Brien was offered the role after producers saw him in the London stage production of Butterflies Are Free.

Annie Jones has just returned from the US where she appeared on a cable TV channel to promote her Oz Beauty Video, a guide to successful grooming.  Now, the former Neighbours star is preparing for her next role in an SBS series about the lives of Australian immigrants.  Jones, who used to be Annika Jasko, is the only Australian-born child of Hungarian parents who settled here in the 1950s.  She is also fluent in Hungarian and will speak the language in the new role. 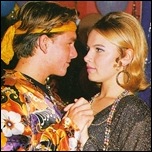 Nine Network series Family And Friends is about to turn back the years as some of its characters are taken back to the Seventies as the theme for a school social.  The social is also the scene for Renato’s (Gavin Harrison) seduction of Cheryl (Justine Clarke, pictured with Harrison) in an attempt to get her away from Marco (Adrian Lee).

John Laws says…
”British TV viewers are “soaps” – and mainly Australian ones – more than ever before, according to the latest statistics.  Of 30,000 viewers polled recently, more than 65 per cent chose either Neighbours, Home And Away or Prisoner (Cell Block H) as their favourite viewing.  And in England they are saying that the recent $20 million deal for hundreds of Home And Away episodes to be screened in Britain over the next few years actually saved the Oz soap from getting the chop.  At a time when the film industry in Australia is languishing, it’s at least reassuring to know that one section of our TV industry is creating new markets and turning a profit.  Let’s hope it stays like that.” 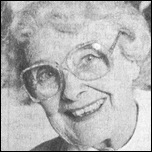 Program Highlights (May 19-25):
Sunday:  HSV7 crosses to Subiaco Oval in Perth for the AFL clash between West Coast Eagles and Brisbane Bears, followed by highlights of the game between Footscray and Essendon.  ATV10 presents Rugby League with the State Bank Big Game, direct from Sydney.  Sunday night movies are Young Guns (HSV7) and Red Heat (ATV10), while GTV9 presents the first instalment of mini-series The Private War Of Lucinda Smith.
Monday:  ABC screens the final in the Wendy Harmer series, In Harmer’s Way.
Tuesday:  Veteran actress Queenie Ashton (pictured) is a guest star in this week’s episode of GP (ABC).  HSV7 crosses live to the Sydney Cricket Ground for the AFL State Of Origin match between NSW and Victoria, presented by Bruce McAvaney.
Thursday:  Annie Jones guest stars in The Flying Doctors (GTV9).