The St Kilda Film Festival in association with the National Film And Sound Archive is presenting a tribute to Graham Kennedy. Kennedy, who hailed from nearby Balaclava, of course went on to become of Australia’s most celebrated showbusiness identities. From his early days in radio to conquering the new medium of television — eventually even winning …

END_OF_DOCUMENT_TOKEN_TO_BE_REPLACED 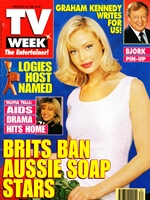 Brits ban ‘greedy’ Aussie soap stars Magazine titles in the United Kingdom are banning Australian soap stars from their pages in protest at the large sums being asked for interviews and photo shoots. The editors of the magazines have written to the actors’ agents, complaining that some of the asking prices — some as high …