Brits ban ‘greedy’ Aussie soap stars
Magazine titles in the United Kingdom are banning Australian soap stars from their pages in protest at the large sums being asked for interviews and photo shoots. The editors of the magazines have written to the actors’ agents, complaining that some of the asking prices — some as high as $60,000 — have got out of hand. Former Neighbours star Dan Falzon has admitted that he and his agent have knocked back interviews in the past because money was not forthcoming, but the actor says he is reconsidering his position. “You need the publicity and it is better to keep the magazines as friends,” he told TV Week. Meanwhile, Lori Miles, editor of UK magazine TV Quick, said she was shocked when Kimberley Davies‘ (pictured) agent demanded $120,000 for a photo shoot. Davies’ London agent, Phil Dale, insists he never asked such a high figure but says that he would expect the magazines should pay for the actors’ services. “If the magazines want time out of these actors’ lives, they have to pay them,” he told TV Week. Meanwhile, the British government is cracking down on work permits for the annual pantomime season — where Aussie actors have been known to get paid up to $20,000 a week. Although Falzon and Davies were successful in negotiating permits for panto appearances, on the basis that they were “famous” enough, other stars such as Dieter Brummer and Natalie Imbruglia were denied permission. Former Neighbours star Scott Michaelson missed out on a role in the British soap Brookside after the government would not grant him a permit. The British backlash against the soapie stars is also penalising actors from other shows such as Blue Heelers. Lisa McCune, who recently toured the UK with co-star John Wood to promote the show, said they weren’t even being approached by magazines. “Some publications stayed away because they thought we wanted to get paid,” McCune told TV Week. 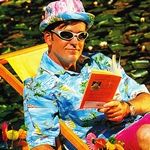 Daryl to host Logies
Hey Hey It’s Saturday‘s Daryl Somers has been announced as the host of the upcoming 38th annual TV Week Logie Awards. “It’s the third time I’ve hosted the Logies and I have fond memories of the past two occasions (1988 and 1991). I’m sure this will be just as memorable,” he told TV Week. The awards presentation will be held in April.

Monday: In Water Rats (7.30pm, Nine), the shark-ravaged body of a champion ironman is washed up on the beach and a forensic examiner says he died of a heart attack, his body full of steroids. The Ansett Australia Cup (8.30pm, Seven) features Fitzroy versus Footscray. 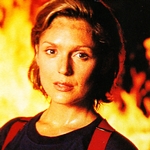 Tuesday: The Cricket World Cup (8pm, Nine), featuring Australia versus India, is live from Bombay. In Blue Heelers (8.30pm, Seven), the inquest into the death of a notorious child killer is about to open and Nick (William McInnes) is the prime suspect. In Fire (9.30pm, Seven), Tex (Tottie Goldsmith, pictured) is forced to confront her future as a firie.

Friday: The Cricket World Cup (2.30pm to 6pm, 7pm to 10.15pm, Nine) features Australia versus Zimbabwe. In Neighbours (6.30pm, Ten), Stonie (Anthony Engelman) tries valiantly to impress a girl at university, but she only has eyes for Mal (Benjie McNair).