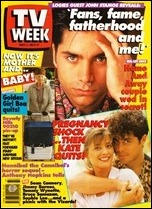 Cover: John Stamos Pregnant… then a pause E Street character Sheridan Sturgess (Kate Raison, pictured lower right with co-star Marcus Graham) has been through a fair bit lately. She’s been hunted by a serial killer, menaced by him, locked up in prison and then becomes an escapee. Now she’s having a baby! The latest development …