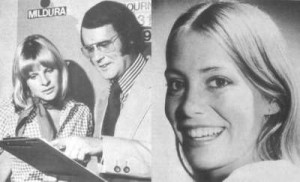 Here’s two more weather girl presenters that did not get included in our Flashback #38 tribute. Briony Behets (pictured left with newsreader Bruce Mansfield) was a model before turning actress with roles in steamy soap operas Number 96 and The Box before becoming a weather presenter at Melbourne ATV0’s Eyewitness News in 1976. At the same time Melbourne’s GTV9 announced their new weather presenter, Kerry Armstrong — fresh out of school and later to go onto an acting career in movies and television. Pictures: TV Week, 7 February 1976

Permanent link to this article: https://televisionau.com/flashbacks/weather2