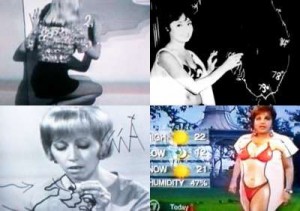 There were times when presenting the weather on television was more for entertainment value rather than providing an in-depth weather analysis. Clockwise from top left: In the 1970s, SAS10 Adelaide’s Helen Cutting was seen but never heard as she would write the temperatures on a large scale map of Australia — while subject to some less than subtle camerawork — as the newsreader read out the forecast. Adelaide favourite Anne Wills donned a bikini as part of a dare when presenting the weather at NWS9 in 1966, and thirty years later found an alternative to the bikini when presenting the weather at SAS7. And Melbourne’s Robina Beard had her drawing skills put to the test in the 1960s as she illustrated the weather in front of the cameras at GTV9.

Permanent link to this article: https://televisionau.com/flashbacks/weather