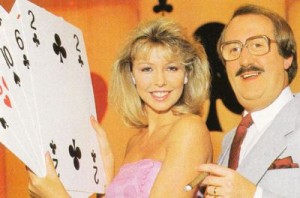 English-born comedian Ugly Dave Gray was a regular on GTV9’s In Melbourne Tonight in the 1960s, and was a host of the program in 1970. He later turned to acting, appearing as nightclub owner Bunny Howard in The Young Doctors in 1976, before taking a position on the celebrity panel of top-rating game show Blankety Blanks in 1977. Gray then hosted his own game show Celebrity Tattletales in 1980, and returned to TV again in 1984 to host the Seven Network’s Play Your Cards Right, pictured with co-host Kerrie Friend. Picture: TV Week, 29 September 1984

Permanent link to this article: https://televisionau.com/flashbacks/uglydavegray