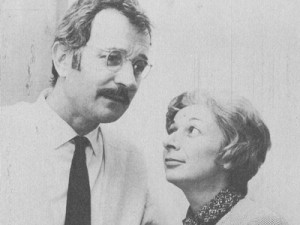 Looking a lot different to his former persona of the dapper tonight show host is Stuart Wagstaff, pictured here with June Salter as guest stars in The Godfathers — a popular family comedy-drama for the Nine Network in the early 1970s. Wagstaff had come from hosting the recently-cancelled In Melbourne Tonight and Salter was known to viewers as one of the ensemble cast in the comedy The Mavis Bramston Show. Picture: TV Week, 30 October 1971

Permanent link to this article: https://televisionau.com/flashbacks/stuartwagstaffjunesalter