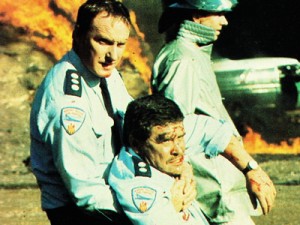 Ray Meagher and Tom Oliver are two of the longest serving actors currently (in 2014) on Australian TV. Meagher has been with Home And Away as grouchy Alf Stewart since the series debuted in 1988. Oliver made his first appearance as Lou Carpenter in Neighbours at around the same time though he didn’t become a regular cast member until the early 1990s.

While the two actors have been firmly associated with rival dramas they did work together in an episode of the Seven Network series Skyways in 1980. Oliver played the part of Jack Hemmings, a firefighter who resented being sent to a firefighting refresher course held by Neil Court (Meagher). Jack’s disinterest in the course almost leads to tragedy for a young course participant — with Jack then driving from the scene at high speed before his car misses a turn and overturns in a crash. The car bursts into flames and Jack is dragged to safety by his rival Neil.

The episode was filmed on location outside Melbourne Airport.

Permanent link to this article: https://televisionau.com/flashbacks/raymeaghertomoliver