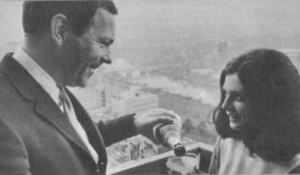 In 1968, GTV9 launched Melbourne’s new breakfast TV program Today. Celebrating the launch of the program is host Mike Walsh and co-presenter Bobo Faulkner. The program began began at 7am on Monday 3 June 1968. The Today format later moved to the Seven Network before being rested and later revived as a national program on the Nine Network in 1982. Picture: TV Week, 1 June 1968

Permanent link to this article: https://televisionau.com/flashbacks/mikewalshtoday