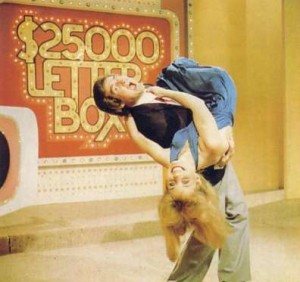 On the set of game show $25,000 Letterbox are host Paul Makin and model Diana Christensen. The program was produced at TVW7 Perth and initially shown only in Perth but later had a brief run on Seven Network stations in other capital cities. Picture: TV Week, 6 September 1980

Permanent link to this article: https://televisionau.com/flashbacks/letterbox