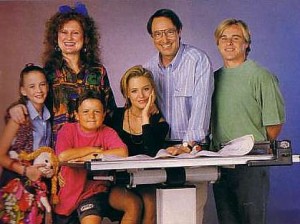 Although perhaps not so fondly remembered by Australian viewers, Hey Dad! was Australia’s most successful television sitcom, and one of the longest running sitcoms in the world. The series ran for over 250 episodes from 1987 to 1994 and sold to over 20 countries. Pictured here is the 1993 cast: Julie McGregor, Robert Hughes, Ben Oxenbould, Angela Keep, Matthew Krok and Rachael Beck. Picture: TV Week, 17 July 1993

Permanent link to this article: https://televisionau.com/flashbacks/heydad1993