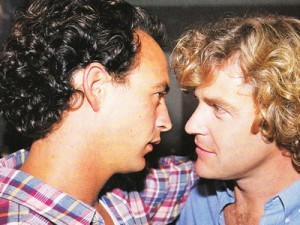 ABC’s long-running medical drama GP was never one to shy away from controversial medical and social topics. In 1994 the series tackled the topic of homosexuality when new doctor Martin Dempsey (Damian Rice) is depicted in a relationship with Patrick Walsh, played by Lochie Daddo. Not since the days of Number 96, The Box and Prisoner had the topic of homosexuality been so openly portrayed in TV drama: “I was worried how the public might react,” Rice told TV Week. “But I think it’s time stories like that were told. I was told when I joined GP that the series would deal with confronting issues, so this is one of them, I guess.” Picture: TV Week, 12 March 1994

Permanent link to this article: https://televisionau.com/flashbacks/gp_1994