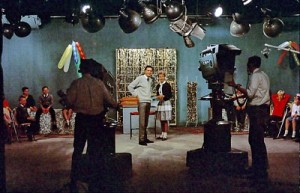 This picture comes from a recent visitor to the site, Stephen J Fleay, in Indonesia: “as a young Queenslander at the time I closely followed TV there from the very start. In 1964 I joined the staff of CBN8 Orange as organist/presenter/booth announcer etc. In country TV ‘we did it all’. CBN8 and later CWN6 (Dubbo) had a staff of around 70 people, and was perhaps closer to the style of a city station than most commercial regionals. The “stand-alone” country TV stations disappeared with the so called aggregation of 1989. I have been away from Australia since the early 80’s moving first to Europe and then to SE Asia as a freelance BBC correspondent. During my time at Orange TV I took many colour (slides) photos of the station, staff and studio programme events. Attaching one which might be of interest for your web site, Michael Macrae and Lorna Goodman, co-hosts of Children’s Corner, CBN8 Orange main studio, 1964.” Picture: Stephen J Fleay

Permanent link to this article: https://televisionau.com/flashbacks/cbn_michaelandlorna