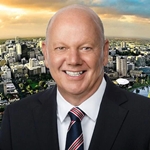 It marks the end of 30 years at Seven News in Adelaide for Riddell, and a career spanning 45 years.

He started at Messenger Newspapers in Adelaide before working in radio at 5DN and the Macquarie Radio Network. He made his TV debut at TVW7, Perth, before joining NWS9 in Adelaide in 1981. Congratulations and farewell to John Riddell, after 30 years with @Ch7Adelaide and 45 years in media, he signs off for 7NEWS one last time. https://t.co/jaLhhRbTKf #7NEWS pic.twitter.com/iVTOe0M7On

Permanent link to this article: https://televisionau.com/2019/12/adelaide-newsreader-john-riddell-signs-off.html