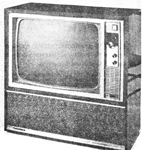 It was 50 years ago that TV Times reported that sometime around September of 1965, the Postmaster-General Department issued the two millionth TV receiver licence in Australia.

Back then, and up until the mid 1970s, any household wishing to operate a radio or television set in Australia had to purchase a licence to do so. The annual cost of a TV licence was around £6, or higher if combined with a radio licence. The revenue derived from these licences went towards funding the national broadcaster, ABC. The licence scheme was based on a similar model which is still in place today in the United Kingdom.

With more than two million sets in use across the country, Australia (with an overall population then of around 11 million, living in 3 million households) was deemed to have well adapted to the medium that had debuted nine years earlier. Viewers were also becoming more savvy as to what they wanted from a TV set — with a range of models and sizes available, the advent of basic remote controls, portable sets, earpieces for hearing impaired viewers and better picture quality — and manufacturers had been adapting to improved technology, making sets cheaper and more reliable. Fifty years ago, top of the range TV sets could come with a clock or timer, enabling the TV set to be switched on or off at pre-determined times. Other sets, such as the 25-inch “Kriesler Multi-sonic Television Theatre”, as well as a clock/timer, included a record player, radio, microphone and speaker facilities… for around £400 ($800 in 1966 dollars). The trend was also moving towards households owning a second TV set — leading to a booming market for portable sets, usually between 11 and 16-inch screens and retailing for anywhere between around £80 and £135.

Improvements in technology meant that 1965 model sets relied less on valves, which were estimated to account for as much as 60 per cent of TV set breakdowns, and more on transistors which were more robust and less likely to have troubles. The sets also had better ventilation, making them less likely to overheat, and had eradicated the problem of “implosions” — where picture tubes would shatter inwards under atmospheric pressure! 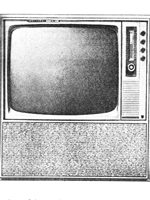 The design of sets in Australia had settled towards a style somewhere between the contemporary design of European sets and the larger, ‘colonial’ style that was common in the United States. Manufacturers had also experimented with larger screen sizes, such as a 27-inch model, but found the market unwilling to adopt them in sufficient numbers.

The next big development in the design and manufacture of TV sets was the advent of colour TV. In 1965, despite some “informal” colour test transmissions, the official introduction of colour TV was still expected to be “five to ten” years away and it was still not known which colour TV standard would be adopted by Australia.

Permanent link to this article: https://televisionau.com/2015/12/50-years-ago-more-than-2-million-tvs.html