Summer Bay beauty becomes screen queen
Home And Away‘s Isla Fisher (pictured) is being kept busy during the show’s end of year break. The young star will be catching up with family in Perth and will also be in demand to promote the release of her second novel, Bewitched. Her first book, Seduced By Fame, was a top-seller and she has had positive feedback about the second. “People who have read my second book say that I’ve developed a lot as a writer, and that’s great to hear,” she told TV Week. She has also had a lot of feedback from viewers for her portrayal of Shannon, a character suffering from anorexia nervosa, in Home And Away. “I’ve had a lot of feedback about that storyline, particularly relating to the bulimia. I think everyone is self-conscious about one part of their body or another, and I’m no different, but I still felt a lot of research was required for me to play the part truthfully. I spoke to health experts and girlfriends of mine who have had anorexia.” Fisher was recently in Melbourne for a TV Week photo shoot for the launch of the $40 million Jam Factory cinema complex, being photographed with a collection of Hollywood icons. Fire drill heats up
The cast of the Seven Network‘s Fire have sweated through an intensive five-day fire-fighting course in preparation for production of the second series. Taking part in the RAAF training in Brisbane were cast members Andy Anderson, Tayler Kane, Wayne Pearson and newcomers Damian Pike, Robert Morgan, Danny Adcock, Damian Rice and Tottie Goldsmith. “On the second day we were fighting fires, and they had us in the room where they find out if you’re claustrophobic,” Anderson told TV Week. “You put the breathing apparatus on and you’re put in a smoky, darkened room and they say, ‘Find the dead body’. I would like to have been a firey, because I think, ‘Yeah, I could have copped this quite well’, but I also know that it’s play-acting. (In real life) you can’t put up your hand and say, ‘The game’s over, take two’.” Co-executive producer Tony Cavanaugh says none of the Fire actors from either series have failed the course. “They always think the girls will fail, and both times — with Georgie (Parker) and now Tottie — we’ve had begrudging approval, support and recognition that girls can be just as good as guys at fighting fires,” he said. 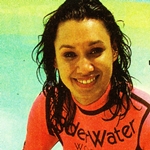 Sealed with a kiss
Totally Wild reporter Angela Brown (pictured) recently got up close and personal with Friday, the first seal to be born and survive at Under Water World’s newly established breeding program. Brown was there as Friday took its first dip in the deep-water pool. “It actually came up and nudged me on the nose,” she told TV Week. “I think it thought I was its mother. It came out, nudged me and then realised I wasn’t its mum and shot back into the water and went swimming to look for her.” And while mother seals can sometimes not want the baby or have enough milk to support the newborn, Brown says that both mother and baby are doing really well. “(The mother) loves it to bits and she has lots of milk and the baby seal is growing quite steadily.” 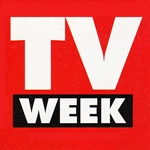 “After three years as editor of TV Week (my second stint in the position), I have been appointed US editor for Pacific Publications (Melbourne), the company that publishes TV Week, New Idea, Sports Weekly, The Australasian Post, Disney Adventures, Foxtel, Home Beautiful and Your Garden magazines. Garry Williams, my deputy editor for most of the past three years, becomes editor of TV Week. I don’t want to appear all misty-eyed, but there is some reflecting to do. TV Week is almost as old as the television industry itself — pushing 40 — and three years ago it was showing signs of middle age. There was no doubt that TV Week had to smarten up and reposition itself to some extent, and I think we have achieved that in the past three years. From the television point-of-view, we were the first to introduce full colour in our program guide, and the first in Australia with the video programming system G-Codes. Everyone else has followed. I think we’ve become better at what we do, and I look back on it with a great deal of pride.”

Monday: With the schedule filled up by B-grade first-runs and heaps of repeats… what are the hot topics of the American talk shows? “He Cheated On Me… Trust Me, Girlfriend, He’ll Cheat On You Too” (Ricki Lake, 12pm, Ten) and “Are You Still Haunted By Your First Love?” (Oprah Winfrey, 2.30pm, Ten). 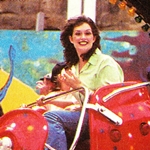