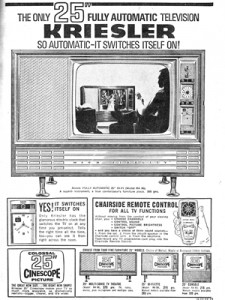 It was 50 years ago that TV Times reported that sometime around September of 1965, the Postmaster-General Department issued the two millionth TV receiver licence in Australia. Back then, and up until the mid 1970s, any household wishing to operate a radio or television set in Australia had to purchase a licence to do so. The …

END_OF_DOCUMENT_TOKEN_TO_BE_REPLACED

Permanent link to this article: https://televisionau.com/2015/12/50-years-ago-more-than-2-million-tvs.html