Echoes of the past
Network Ten‘s ailing soap Echo Point is starting to look like a Hey Dad reunion. Julie McGregor, who played ditzy Betty in Hey Dad, is to join Echo Point as nutty Narelle. And now Ben Oxenbould, who was Ben in Hey Dad, is about to start filming his new Echo Point role, a surfer called Wacka.

Old Neighbours’ new TV romance
Former Neighbours couple Rachel Blakely and Mark Pennell are to be reunited as lovers in an upcoming episode of Blue Heelers. The pair, who played Gaby Willis and her occasional boyfriend Jack Flynn, will be appearing in Blue Heelers as ambulance officer Gina Belfanti and doctor Andrew McKenzie. Blakely made her first appearance in Blue Heelers in July but has been brought back for five more episodes to incorporate the storyline with the drug-abusing doctor. 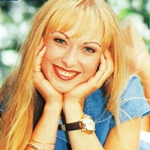 Terasa’s in a spin over Agro!
Terasa Livingstone (pictured) was a roving reporter for Cartoon Connection, but since taking over as host of the show, she says, “The most danger I’ve been put in is actually opening my mouth in the studio! We have no scripts, nothing is rehearsed. It is scary. We get counted in and Agro will just come in with a line and I’ll assume his is going to be better than mine, so I’ll say, ‘Yes’, and just shut up straight away.” A professional dancer and model, Livingstone had originally auditioned for a presenting role on Saturday Disney after Sofie Formica left. She didn’t get the job but was able to go back to audition for the Cartoon Connection job and was successful.

Going from Col’n to Correlli
Former Col’n Carpenter star Kaarin Fairfax makes a return to TV after three years as a full-time mum, making a guest appearance in ABC‘s Correlli, playing the part of a prison inmate’s wife. “It’s been nice to have a break,” she told TV Week. “I’ve come back refreshed and with a new love for acting.” Her character, Terri, becomes disenchanted with her husband, Rod (Roger Stephen), who is in jail waiting to be sentenced for another crime. 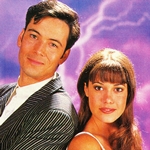 Sunday: AFL Sunday (1pm, Seven) includes Sydney versus Collingwood, live from the Sydney Cricket Ground, followed by Fremantle versus West Coast, live from Perth. The Fourth Quarter Final of the ARL (2.30pm, Nine) is delayed from the Sydney Football Stadium. In Heartbreak High (5.30pm, Ten), Steve (Corey Page) discovers he has a sister he has never heard about. Sunday night movies are The Addams Family (repeat, Seven), The Politician’s Wife (Nine) and Dad (Ten).

Monday: In Neighbours (6.30pm, Ten), things get a little too serious for Billy (Jesse Spencer) and Melissa (Aimee Robertson). In Frontline (8pm, ABC), when ethnic violence hits the streets, the Frontline team are there to capture it — but nobody is prepared to pay the price.

Tuesday: In Neighbours (6.30pm, Ten), Libby (Kym Valentine) finally gets to “surf the internet”. In Home And Away (7pm, Seven), evidence surrounding Mud’s (Tom Richards) murder points directly at Selina (Tempany Deckert). In Blue Heelers (8.30pm, Seven), the Heelers are called in to investigate the theft of drugs from the local hospital.

Wednesday: In Correlli (8.30pm, ABC), an assessment session with Sam (Richard Piper) is a disaster for Louisa (Deborra-Lee Furness).

Friday: In Home And Away (7pm, Seven), a novelist contacts Shannon (Isla Fisher) about her writing. Friday Night Football (8.30pm, Seven) includes delayed coverage of the Qualifying Final from the Melbourne Cricket Ground.