Stars desert ‘reborn’ Wandin Valley
Shane Porteous, one of the few A Country Practice stars to survive the show’s entire 12 year run, will not be following the series when it takes up residence at Network Ten next year. The main factor in his decision was Ten’s plan to relocate production from Sydney to Melbourne. Co-star Kym Wilson has also opted not to stay with the series, while Andrew Blackman is unsure. “A Country Practice will be back, but I don’t know if it will be with Andrew Blackman or not,” he told TV Week. So far it appears that the only ACP cast member agreeing to follow the production to Network Ten is Joyce Jacobs, who plays town gossip Esme Watson. Producer James Davern has admitted his surprise that Ten had picked up the series after it had been axed by Seven. “We had accepted the show was over and we were busy planning other projects,” he told TV Week. “I’m very happy because I feel it is a good show and I believe there is more life left in ACP, and Channel Ten believes so too.” 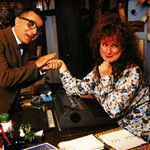 Has Betty met her match?
Hey Dad‘s wacky secretary Betty Wilson (Julie McGregor) now has a new admirer, a deputy town clerk named Neville Short. For actor Arky Michael, who played nerdy Fulvio in Rafferty’s Rules,  it’s yet another role playing a glasses-wearing, nerdy, unlucky in love character but he’s not complaining. “They’re the most interesting characters,” he told TV Week. “To play a nerd is actually a lot of fun, because you’re taking the p— out of yourself, in a sense, and people respond to that. I enjoy doing drama but nerds are something I do quite frequently.” Neville tries to woo Betty with gifts of rhubarb and broccoli and romantic love poems, with predictable results. “He falls in lust — there’s no other word for it,” Michael said. “He’s very single-minded about his intentions. He asks her to marry him within three scenes.” 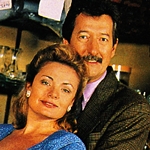 That wasn’t in the script!
Actor Michael Caton, best known from The Sullivans, thought he had found a new career as a writer — only to end up back in front of the cameras. “I was developing a few ideas for film scripts, and I went to see Paradise Beach producer Jock Blair about the possibility of writing some episodes for him,” he told TV Week. “The next thing I knew, I was in it!” Caton plays the part of Ken Hayden, father of Tori (Megan Connolly), who takes over Anna’s Cafe with wife Joanie (Paula Duncan).

“You simply couldn’t pick up a tabloid newspaper for a few days without someone prophesying Nine‘s impending doom. Nine badly needed a four-ball and then to time it to perfection, and that’s what the Jana (Wendt) announcement provided. Jana’s return (to 60 Minutes), of course, will be a boost to Nine’s stocks, although I am positive the network would have liked her back in the five-nights-a-week cauldron. The deal struck is a tribute to the steadfast determination of both parties involved. Jana had been approached to do stories for the CBS version of 60 Minutes, but to do so she needed Nine’s blessing because she was still under contract. Nine wanted her back on air in Australia, so the eventual compromise — from both sides — was for her to anchor 60 Minutes here and contribute some stories to 60 Minutes over there.”

Monday: Denise Drysdale is this week’s guest co-host on Sale Of The Century (7pm, Nine). In A Country Practice (7.30pm, Seven), Kate (Michelle Pettigrove) technically assaults physio Mike Stirling (Christopher Stollery) in an attempt to protect herself from sexual harassment. In Healthy Wealthy And Wise (7.30pm, Ten), Robbie Burns visits to seaside hamlet of Robe, located half-way between Adelaide and Melbourne; Lyn Talbot meets a solicitor who has taken up needlepoint as a pastime to help him cope with stress; Ross Greenwood looks at mobile homes, and the traps and hidden costs to look out for at caravan parks.

Tuesday: In Home And Away (7pm, Seven), Nathan’s (David Dixon) dark side begins to emerge when Sarah (Laura Vasquez) dumps him. In A Country Practice (7.30pm, Seven), when Kate’s (Michelle Pettigrove) story of sexual harassment is substantiated, Mike (Christopher Stollery) offers to drop his formal charges — however, Kate decides to further her case to help protect other women. In GP (8.30pm, ABC), Steve (Michael O’Neill) and Su Lin (Theresa Wong) go to Adelaide for a holiday. During their stay, Steve’s sister and her husband are killed in a car accident, leaving Steve and Su Lin to look after their children.

Wednesday: In Newlyweds (8pm, Seven), Allie (Annie Jones) is concerned that she is overweight, so she and Peter (Chris Gabardi) embark on an exercise regime. Documentary Cenotaph (8.30pm, ABC) looks at the still-present effects of the Great War on the NSW town of Hay which gave up an extraordinary number of its youth to the battlefields of Europe.

Friday: Nine crosses to the WACA, Perth, for Day One of the First Test — Australia versus New Zealand — with live coverage from 1.20pm to 6.00pm, then delayed coverage from 8.30pm to 10.40pm. In The Great Outdoors (7.30pm, Seven), Bridget Adams uncovers some prehistoric fossils on a dig near Canowindra; and Andrew Ettinghausen meets the Rambo Ambos — the men of the Care Flight Rescue Squad — who assist people in distress in the Blue Mountains.