Taking to catwalk to TV
Kimberley Davies and Lisa Lackey might be soap opera rivals — with Davies in Neighbours and Lackey in Home And Away — but the pair (pictured) are close friends whose career paths have coincidentally matched.  They first met each other at a party hosted by a mutual friend, then both ended up modelling with the same agency. Then they both made the transition to soaps at around the same time. “We had a lot in common from the word go, and we’re still on that same road together,” Lackey told TV Week. “However, I’ve never felt there’s been any rivalry or jealousy, because we both had the same wants, were ambitious and moving in the same direction at the same time.” 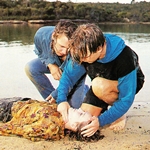 Bobby’s boating tragedy
Home And Away star Nicolle Dickson‘s exit from the long-running series is approaching.  A fund-raising picnic at Summer Bay turns to tragedy when Bobby (Dickson) agrees to a speedboat ride with Luke (John Adam). The boat hits a log and is overturned. Bobby is knocked unconscious and is washed up on the shore. Husband Greg (Ross Newton) is by her side as she lay in a coma in hospital — will she regain consciousness and continue to make amends in her rocky marriage to Greg? Or will Greg be faced with the decision whether or not to turn off the life support system?

Stark-crossed lovers
English comedian and writer Ben Elton attributes his love of Australia and his Australian girlfriend, musician Sophie Gare, as the inspiration to base his novel Stark in the Outback. The book, which he wrote in Australia, has sold a million copies and has led to a $7 million mini-series adaptation in a joint venture between ABC and BBC.  Stark stars Elton and a strong cast of both Australian and English actors — including Aussies Colin Friels, Bill Hunter, Gus Mercurio, Deborra Lee Furness, Gwen Plumb, John Clarke, Colette Mann, David Argue, Marshall Napier, Bruce Venables and Jacqueline McKenzie. Stark was filmed on location in Melbourne and the outback town of Coober Pedy

Lawrie Masterson; The View From Here 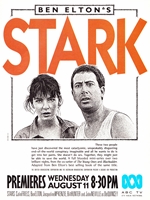 “Ben Elton‘s “seriously funny” mini-series Stark is not so much environmentally conscious as environmentally wide-awake and hyperactive. So strong and, at times, heavy-handed in its message that the postscript — which concerns the amount of rainforest destroyed in the three hours it has taken to watch the series, and so on — seems superfluous, despite its worthiness. An ABC-BBC production, Stark boasts an enviable line-up of talent in front of and behind camera, working on locations ranging from the Outback near Coober Pedy to high-tech interiors in Melbourne. We’re not going to see many mini-series this year, so this could be the one to savour.”

Program Highlights (Melbourne, August 7-14):
Sunday: The start and finish to the Sydney City To Surf Fun Run are broadcast during breaks in Video Hits (9am, Ten) with a full hour of highlights broadcast from 3pm. Author Anne Summers is the studio guest in Sunday Afternoon With Peter Ross (1.30pm, ABC). Sunday night movies are When Harry Met Sally (Seven) and Back To The Future Part II (Ten) — both are repeats.

Monday: In Neighbours (6.30pm, Ten), a custody battle between Philip (Ian Rawlings) and Julie (Julie Mullins) begins over Hannah (Rebecca Ritters), leaving her upset and bewildered. In A Country Practice (7.30pm, Seven), Hugo (Gavin Harrison) becomes involved with Tess Ormond (Alyssa-Jane Cook), an ex-prisoner determined to make a new life for herself and her young son.

Tuesday: In GP (8.30pm, ABC), Ian (Tony Llewellyn-Jones) is accused of sexual misconduct by one of his patients.

Thursday:  In Neighbours (6.30pm, Ten), a bitter argument expels any hope of a reconciliation between Philip (Ian Rawlings) and Julie (Julie Mullins). The second and final chapter of Stark (8.30pm, ABC).