The serious side of “Foxy” Roxy
Home And Away newcomer Lisa Lackey (pictured with co-star John Adam) dismisses suggestions that her career rise has come by pure luck.  “It’s nothing to do with luck,” she told TV Week.  “It’s to do with being there and networking.  It’s to do with listening.  You set goals and whatever happens to improve your goal, you go for it.”  Her career started after finishing high school, doing some pre-school teaching and acting in theatre restaurants.  She then worked as a waitress while she went through college.  Her role as Roxy in Home And Away is her first TV appearance.

Logies: The way we were
In the lead-up to his 18th hosting of the TV Week Logie Awards, Bert Newton (pictured, below, in 1969) reflects on some of his early Logies experiences: 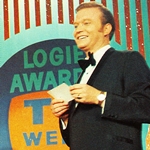 “My very first memory of the Logies is from 1961.  (They were held) in Sydney at the Hilton Hotel, and they wanted us to arrive Hollywood-style, sitting on the back of an open car.  The idea was fine, but what they had forgotten was that to get to the Hilton you had to go through Kings Cross, which back in those days was a lively place.  There was Elaine McKenna and I, and Graham Kennedy and Panda.  Of course, the cars started piling up and these drunken sailors on the street started hurling abuse at us.  They called us every name under the sun.  I’ll never forget that.”

“My other vivid memory from the early years was the first Logies night I compered, in 1967 on the cruise ship Fairstar.  The show went for 90 minutes and there was one guest, Vic Morrow.  Vic was a delightful man, but why they chose him I’ll never know, he made Marlon Brando look like an ear-basher!  Vic was a method actor and he stood there for the entire show and just gave out the Logies.  Every so often, I’d say, ‘How are you going, Vic?’, and he’d just nod his head.  He was totally method… I just wish that in his method training they’d covered how to portray a guest at the Logies!”

“There are many famous stories associated with the guests who have appeared at the Logies — the Michael Cole incident is one that people still refer to.  Michael, who was the star of the popular Mod Squad, dropped the s— expletive, which doesn’t sound much now, but in 1973 that word had just never been said on television.  It was a major incident then.  The funny thing was that on the night, Channel Nine received thousands of calls complaining about it, but on the Sunday replay when they took it out they got double the calls complaining that it had been dropped.” 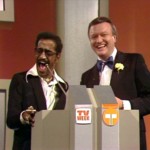 “One of my favourite Logies guests was Sammy Davis Jnr (pictured, 1978).  He had been in town on a concert tour the year before, had watched the entire telecast and later rang through to congratulate me and ask if he could be on the show the following year.  And that was the last we heard of it… until two days before the Logies, when the message came through that he was on his way.  He arrived on the day of the show.  He was jetlagged, had had no sleep and he came on and absolutely killed them.  He was fabulous.  He was one of the best guests we ever had.”

Logies: Now it’s Farnesy and Jonesy!
John Farnham and Tom Jones will team up for a special appearance at the upcoming 35th anniversary TV Week Logie Awards.  “I’ll sing with John every chance I get!,” Jones told TV Week from Las Vegas.  After the Logies, Jones will begin his Australian tour, starting at Melbourne’s Concert Hall.  For Farnham, it will be his first major appearance since his season in Jesus Christ Superstar: The Concert.

“All votes are in  and some final checks are being made, and by this time next week we will be able to tell you all the nominations for the 35th annual TV Week Logie Awards.  The big night is Friday, 19 March, so don’t miss Network Ten‘s live telecast, to be hosted by Bert Newton.  Next week we’ll also have the second instalment of Bert’s look back at the Logies, the awards with which he is so synonymous.”

Monday:  In Home And Away (7.00pm, Seven), Sally (Kate Ritchie) develops a crush on Damian (Matt Doran) when he accompanies her to a concert.  In A Country Practice (7.30pm, Seven), Frank (Brian Wenzel) is tempted by a romance with recently-widowed April Patterson (Elaine Lee).  Seven has the second half of the movie Dances With Wolves, while Ten debuts US mini-series The Jacksons; An American Dream.

Tuesday:  In A Country Practice (7.30pm, Seven), Frank (Brian Wenzel) believes he is responsible for a car accident involving Darcy (Kym Wilson) and Tara (Brenda Webb).  In All Together Now (8.00pm, Nine), Doug (Garry Who) announces he is going to marry an obnoxious English tourist.

Thursday:  In Gluttony, tonight’s episode of Seven Deadly Sins (9.30pm, ABC), Gina (Gia Carides) and Mark (Richard Roxburgh) are expecting a baby and are eager to assume what parenthood will bestow on them.  Pamela Stephenson is the new host in the series return of Sex (9.30pm, Nine). 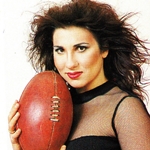