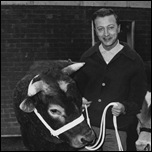 When TV looks back on the man that was Graham Kennedy, it rarely drifts from the public side of the talented performer:  The hilarious moments from In Melbourne Tonight, his comic rapport with Bert Newton, the portrayal of the mega-camp ‘Cyril’ in Blankety Blanks, and the 1980s success of Graham Kennedy’s News Show, just to name a few.

But as well as the very public Kennedy, it was well known that there was also an equally private one.  A shy, somewhat reclusive person who rarely gave any real insight into his life away from the cameras.

In The Real Graham Kennedy, a one-hour documentary screening tomorrow (Sunday) night on ABC1, a number of Kennedy’s former colleagues, friends and employees recall some of their experiences and memories of Kennedy, giving some insight into this private persona.  Some of those appearing in the program include Val Wesley, Ernie Carroll (the man behind Ossie Ostrich), Toni Lamond, Joy Westmore, Rosemary Margan (who confessed having to ask a friend what was that word that Kennedy had disguised as a “crow call” on that infamous night in 1975), Mike McColl-Jones, Philip Brady, Pete Smith, Denise Drysdale and Susan-Gaye Anderson.

The program also includes rare home movie footage and some early comedy sketches, depicting some of Kennedy’s early comic influences, as well as audio commentary from Kennedy himself as he recalls some of his family and his early background.

The Real Graham Kennedy was produced in 2009 by Bob Phillips, a former producer of In Melbourne Tonight.