Ernie Carroll, the man who gave us Ossie Ostrich for over 30 years, has died at the age of 92 from natural causes.

Starting in radio in the 1950s, he made the move to the new medium of television, joining GTV9 in its first year of operation. He worked as a writer, cartoonist and performer on children’s show The Happy Show (later called The Tarax Show), introducing the puppet character Ossie Ostrich. He also wrote for Graham Kennedy on In Melbourne Tonight and was a cartoonist, penning cartoons depicting characters Gerry Gee and later Ossie Ostrich in weekly comic strips for TV Week. Ernie Carroll (third from left) in The Happy Show

When Hey Hey It’s Saturday launched on Nine in 1971, Daryl Somers originally co-hosted with footballer Peter McKenna. McKenna’s stint with the show was brief, and Carroll decided to resurrect the Ossie Ostrich character as the replacement. The chemistry between “Daryl and Ossie” was a winner for the Saturday morning show, with the pair also hosting the after school show Cartoon Corner. They released albums and hosted a prime time special, The Daryl And Ossie Show, in 1978. This was followed by a move to rival channel ATV0 to present a new game show, also called The Daryl And Ossie Show. The new show was short-lived and the pair ended up back at Nine to revive Hey Hey It’s Saturday in 1979. Carroll later extended the Ossie Ostrich character to co-hosting a children’s show, The Ossie Ostrich Video Show, and appearing in TV commercials. 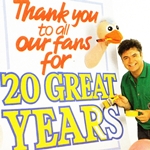 Carroll later went on to become business partners with Somers to produce the show. He retired from playing Ossie Ostrich at the end of 1994 but returned for the second of the Hey Hey It’s Saturday reunion specials in 2009 and for the follow up series in 2010.

A tribute to Carroll was played in the recent 50th anniversary special for Hey Hey It’s Saturday, which aired last year.

Permanent link to this article: https://televisionau.com/2022/03/obituary-ernie-carroll.html