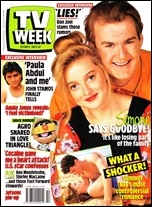 ‘It’s like losing part of the family!’
Hey Dad! star Simone Buchanan has confirmed that she has left the long-running comedy series.  “I haven’t re-signed,” she told TV Week.  “We filmed the last episode this week and I still have no idea what they are going to do with (character) Debbie.” For co-star Chris Truswell (pictured, with Buchanan), who plays Nudge in the series, has told TV Week that after six years it is hard to see her go.  “It’s like losing part of the family,” he said.  “I can tell Simone all my problems.  She is my sanity, in a way.  She is so intuitive.”

A couple of high-flyers!
It’s no wonder Steve Vizard’s and Michael Veitch’s Fast Forward flight attendant characters Daryl and Wayne (pictured, below left) are so funny – they started as a joke between the two actors.  “Steve and I used to do poncey voices in the corridors at Seven whenever we bumped into each other,” Veitch tells TV Week.  “Someone said, ‘You sound like two airline stewards’, and we thought it was a good idea for a skit!  They’re like comic book characters because they’re so unreal.  A lot of gay people get offended by them, which I think is fair enough.” Veitch stresses that the characters were never meant to be anti-gay.  “They are dreadful stereotypes,” he says.  “But then, so are a lot of the characters we do.”

‘This means I exist!’
When Fast Forward’s Jane Turner started sending up Alison Drower (pictured, above right), the MTV co-host took it all in her stride – though it presented a shock to her hairdresser.  “My hairdresser was horrified,” Drower told TV Week.  “She was more offended than me.  She said ‘My God, I hope people don’t see your hair like that!’”  But Drower takes the parody as a compliment. “I think it’s very flattering, particularly because it is a continual thing now, rather than just a one-off.  It’s for the show, too, and, hey, this means I exist!” 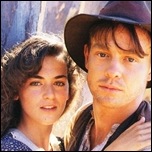 Briefly…
On the eve of the debut of mini-series Shadows Of The Heart, star Jason Donovan (pictured, with co-star Sherrie Krenn) says the audience will see a new side to him:  “My role as a singer, and what I’ve done with Neighbours before, has always been fresh and wholesome.  This is certainly not the boy next door!”  Shadows Of The Heart also stars Jerome Ehlers, Josephine Byrnes and Marcus Graham.

James Valentine, host of ABC’s The Afternoon Show, has been given the green light to develop a new weekly “music program for adults.”  ABC currently has two rock music programs on air – Rage and Countdown Revolution – but the new project aims to appeal to the 25 to 40-year-old age group. 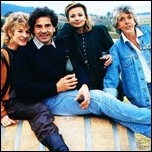 A busload of TV personalities took to the NSW Hunter Valley to propose a toast to the success of the upcoming Sprite TV Celebrity Dance Party, to be held later this month.  Among the stars to lunch at the the Victorian-style Kirkton Park guesthouse, near Cessnock, and then attending a wine tasting at the McWilliams Estate were stars Judy Nunn (Home And Away), John Orcsik (formerly of Number 96 and Cop Shop), Paula Duncan (Number 96, Cop Shop, Prisoner, Richmond Hill) and Bunney Brooke (Number 96, E Street).

John Laws says…
”It saddens me to report that the new series Embassy is close to being a second-class dud.  We’ve never been good at portraying our international neighbours on TV, and in Embassy the fictional country where our earnest-faced diplomats seems to be a laughable cross between Indonesia and Sri Lanka, with a trace of Fiji thrown in for good measure.  Unfortunately, it took only two episodes for Embassy to degenerate into the froth and bubble of an upmarket soapie.  What was obviously a bright idea has languished for want of a sharp-edged script and a bigger budget.”

Program Highlights (October 6-12):
Saturday:  HSV7’s day is dominated by football on the day of the AFL Grand Final.  After the overnight Football Marathon, at 8am HSV7 crosses to the traditional North Melbourne Football Club Grand Final Breakfast – followed by the Under 19s Grand Final at 9am and the Reserve Grade Grand Final at 11am.  At 2pm it’s the main event – the AFL Grand Final between Collingwood and Essendon, live from the MCG, to an estimate worldwide audience of over eight million viewers.  Coverage continues until 6pm, with a replay of the game at 9.30pm. 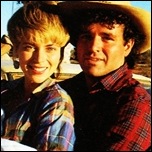 Monday:  The second and final instalment of mini-series Jackaroo (HSV7).

Tuesday:  Brad Robinson presents a one-hour special, Torn Apart (ATV10), looking at the relationship bond between a mother and child and the systems that have been created by bureaucrats, the church, the law and the medical profession that have promoted systems which destroy this relationship – such as adoption, sperm donation, egg donation and surrogacy.  The special is followed by the first of the two-part mini-series Shadows Of The Heart, starring Jason Donovan, Sherrie Krenn, Marcus Graham, Josephine Byrnes, Barry Otto and Robyn Nevin.

Wednesday:  ABC presents the Australian Film Industry’s annual AFI Awards, from the World Congress Centre in Melbourne.  Films nominated in the awards include Blood Oath, The Big Steal, Flirting and Golden Braid.  ATV10 presents the second and final instalment of Shadows Of The Heart.