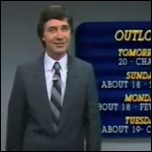 Former Seven National News reporter and presenter Malcolm Gray has died at the age of 66.

Formerly a journalist at regional station GLV10 in Gippsland in the 1970s, Gray moved to Melbourne’s ATV0 before joining HSV7 as an on-the-road reporter and newsreader – but it was in the mid-‘80s when he started presenting the weather forecast for Seven National News that he suddenly became a hit with viewers statewide.  Gray’s presenting of the weather with humour, where he was not immune to using the occasional large prop or shouting out greetings to nominated streets in various Victorian towns and suburbs, was in stark contrast to the more conservative weather presentation of rivals at National Nine News and Eyewitness News.

Gray continued to present the weather at Seven National News until 1987.

The Seven News team in Melbourne have placed a notice in the Herald Sun offering a tribute to their former colleague:

Our thoughts and support to the family of Malcolm Gray, a former colleague and friend of the Seven Network. Malcolm was a much loved and respected associate and will long be remembered for his great nature and memorable weather segments. Sincerely – Steve Carey and the 7 Melbourne News Team.

Permanent link to this article: https://televisionau.com/2010/10/malcolm-gray.html