A Current Affair host Jana Wednt caused an upset when she was not present to accept her Gold Logie at the 34th annual TV Week Logie Awards, held at Melbourne’s Radisson President Hotel. The Nine Network host’s absence was explained to be due to her requiring to stay in the Sydney-based studios after the end of …

END_OF_DOCUMENT_TOKEN_TO_BE_REPLACED

Permanent link to this article: https://televisionau.com/2017/04/tv-week-logie-awards-25-years-ago-7.html The Seven Network‘s Steve Vizard was awarded the Gold Logie for Most Popular Personality On Australian TV at the 33rd annual TV Week Logie Awards. The Gold Logie came a year after Vizard, a cast member and producer of sketch comedy series Fast Forward, branched out to produce and host Seven’s late-night talk/variety show Tonight Live. …

END_OF_DOCUMENT_TOKEN_TO_BE_REPLACED

Permanent link to this article: https://televisionau.com/2016/05/tv-week-logie-awards-25-years-ago-6.html 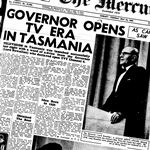