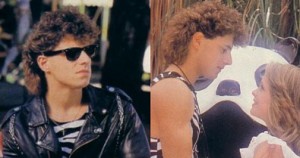 These days he is known for more recent series such as The Secret Life Of Us and the original Underbelly, and for roles in movies including Take Away, Lantana and The Hard Word — but by 1985, Vince Colosimo was already a hit with audiences after appearing in the movies Street Hero and Moving Out. In the Nine Network children’s drama Zoo Family, Colosimo made a guest appearance as himself and captures the attention of Susie Mitchell (Kate Gorman). Picture: TV Week, 30 March 1985

Permanent link to this article: https://televisionau.com/flashbacks/vince85