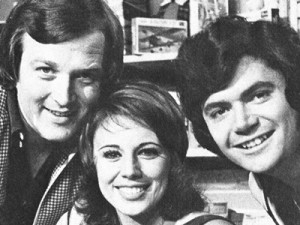 For over thirty years Peter Hitchener has been a trusted face of news at GTV9, Melbourne. Starting his career in Brisbane in the 1960s, Hitchener then moved to Sydney’s TCN9. But then when he went further south to Melbourne in 1974, Hitchener was hosting a game show, Gambit, based on the card game Blackjack. Here he is (left) with Gambit hostess Ros Wood, making a guest appearance on GTV9’s Cartoon Corner with Daryl Somers. Picture: TV Week, 16 March 1974

Permanent link to this article: https://televisionau.com/flashbacks/peterhitchenerdarylsomers