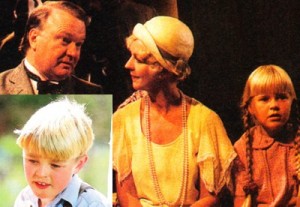 TV’s most famous family, the Newtons, could never be accused of being camera-shy — but it was not often that they all appeared in the same series. In 1988, 11-year-old Matthew Newton (inset) had the role of Freddo in the children’s comedy Sugar And Spice, and making a guest appearance in one episode is the rest of the clan — Bert, Patti and Lauren. The role of Freddo was the young Newton’s second dramatic role after an earlier appearance in the Nine Network’s The Flying Doctors. Sugar And Spice was a $3 million adventure-comedy set in the 1920s, produced for the Seven Network, and also featured Radha Mitchell, Susan Ellis and Frank Wilson. Picture: TV Week, 10 September 1988

Permanent link to this article: https://televisionau.com/flashbacks/newtons