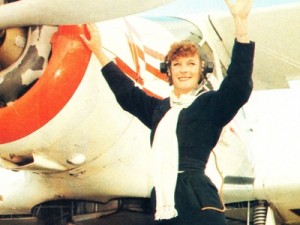 In 1981 former The Box actress Judy Nunn made a guest appearance in another Crawford Productions drama, Skyways. Her guest role is as Bessie Langhurst, a World War II pilot who makes a mysterious re-appearance after going missing on a solo war flight in 1944, and looking exactly as she was when she disappeared — with the 37-year mystery of the missing ghost flight leading to a dramatic climax. Judy Nunn would later go on to appear in drama series Sons And Daughters, followed by the long-running role of Ailsa in Seven’s Home And Away. She is now an accomplished writer with several titles of adult and children’s fiction to her credit. Picture: TV Week, 3 January 1981.

Permanent link to this article: https://televisionau.com/flashbacks/judynunn