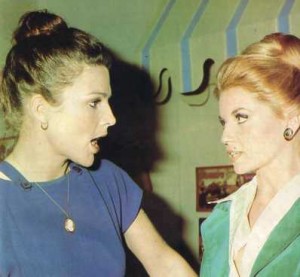 Looking appropriately shocked is Kathryn Dagher, as Nurse Kelly Jones in The Young Doctors, having a ‘heated’ discussion with former Number 96 star Abigail. The Young Doctors got off to a shaky start in 1976 but later found a strong audience following and in 1982 broke the record set by Number 96 as the most episodes produced for an Australian TV drama, clocking up 1396 episodes by the time it ended in 1983. Picture: TV Week, 4 June 1977

Permanent link to this article: https://televisionau.com/flashbacks/abigail1977