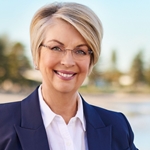 Seven News Adelaide presenter Jane Doyle announced that she is stepping down from the role after 33 years with the network:

“Before I go tonight, I have some significant news of my own to share. It’s been a wonderful privilege for the past 33 years to be invited into your homes and lives to share the day’s news, so I wanted you to be the first to know I’ve decided to sign off at the end of this year to pursue some other ambitions.”

Starting her career as a cadet journalist in 1980, Doyle joined the then Seven Nightly News in 1989, coming across from ABC News. For the last 22 years, Seven News has dominated the news ratings in Adelaide. As well as reading the news at Seven, she also worked for seven years as part of the breakfast team on Adelaide radio station 5AA.

In 2022 she was awarded the Medal of the Order of Australia for her contribution to broadcast media and the community.

As for future plans, Doyle says she is taking some travel and will continue her work on the Board at State Opera SA and supporting various arts organisations in South Australia.

Doyle’s departure from Seven comes after a number of other high-profile exits: Leigh Sales departing 7.30 in July, the imminent departures of Carrie Bickmore from The Project and Tracy Grimshaw from A Current Affair and regional news presenter Shauna Willis leaving Seven News in regional WA.

Permanent link to this article: https://televisionau.com/2022/11/jane-doyle-to-leave-seven-news-adelaide.html