Mary Rossi, one of the pioneers of daytime TV in Australia, has died at the age of 95.

A celebration of her life was held in Sydney on Monday.

Rossi was the first host of ABC‘s Woman’s World program that aired in the late 1950s and early 1960s. Beginning during the first week of ABC television in November 1956, Woman’s World was one of the first programs on Australian television aimed at the housewife audience, covering a broad range of topics and interview subjects.

Rossi hosted the show from Sydney and soon alternated hosting on different days with other presenters including Gwen Plumb in Sydney and Joy Wren, Jean Battersby and Nance Donkin in Melbourne.

A mother of five when Woman’s World began, Rossi challenged the view that women should retire from professional life when they have children. It was a topic that raised itself every time she would add to the Rossi clan — ten children in all!

In 1960, she was asked by TV Times: “Why do you conduct a women’s session when you have a home, a husband and (then) six young children to look after?” She responded: “I’m doing this job because I love the feeling, the self-satisfaction of doing a job well. That’s corny, but I happen to mean it.”

She also reinforced the importance of the family unit. “One of the most important, rarely-mentioned functions of a married woman’s life is helping her husband and family meet recurring crises. And where can you turn for human comfort and advice if there is no solid, family structure? There are organisations of course: the church, and other similar institutions, and these are important. But they don’t have the personal warmth and nearness of your own family.”

By 1970, Rossi had stepped away from television and her professional life embarked on another great love — travel — establishing the tour company Mary Rossi Travel, which continues to operate today. 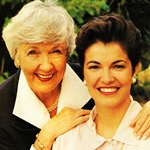 Mary Rossi is survived by one brother, nine of her ten children (including former TV journalist Emma Rossi, pictured), 34 grandchildren and 40 great-grandchildren. Her husband of 63 years, Theo, died in 2010.

Permanent link to this article: https://televisionau.com/2021/05/obituary-mary-rossi.html