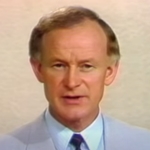 He began his media career at radio station 2VM in Moree, NSW, in the early 1980s.

He then presented Saturday Breakfast on ABC Local Radio until his retirement in 2014.

In 2007 he was honoured with an Order of Australia in the Australia Day Honours, for service to the community, particularly as a contributor to the establishment of the Tamworth Waler Memorial.

David Evans is survived by his former wife Judy, his sisters Joan and Barbara and his brother John.

Permanent link to this article: https://televisionau.com/2021/01/obituary-david-evans.html