Happy New Year from The Sullivans 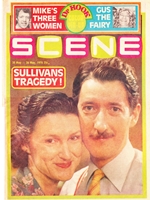 Sadly, as well as World War II still playing out, it would not be a happy year at home for the family, with Rose tragically drowning during a New Year’s Eve celebration in an episode airing in May.

Permanent link to this article: https://televisionau.com/2021/01/happy-new-year-from-the-sullivans.html