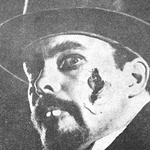 Ralph Baker, the TV producer and floor manager who became a late-night favourite as Melbourne’s Deadly Earnest, has died at the age of 80.

He was diagnosed with myeloma in 2014.

With an early interest in amateur theatre, Baker gained some experience appearing in sketches on GTV9‘s In Melbourne Tonight. He then gained a job in the props department and became a floor manager and producer at ATV0, working on shows including Go!!, Kommotion and Uptight.

Baker, who’d made some minor appearances on shows like The Magic Circle Club, then found himself in the unlikely on-air role of playing the ghoulish character Deadly Earnest, introducing late night B-grade and horror movies on Friday nights. The first film he presented was The Beast With A Million Eyes, on Friday 20 October 1967.

Although in a TV Times interview in November 1967, Baker feigned ignorance at any connection between him and the on-screen character: “I don’t know where people get the idea that I’m Earnest. The fact is that Earnest was born in Transylvania, the son of respectable werewolf parents, during the 15th century.”

“I began life in Lamington Street, Highett (Melbourne) in 1940.”

“I will sometimes admit that Earnest is sometimes seen emerging from the makeup room, an hour after I’ve gone in. But we won’t be sharing for long. He’ll soon have his own dressing room with a scar on the door.”

“It is true, also, that coffin from which he comperes the show fits me like a pinewood glove. But to accuse me of being Earnest would be as absurd as claiming that Mary Poppins is really Julie Andrews.” Deadly Earnest — the character devised in Perth and adapted with different performers in each capital city — became a popular attraction, particularly for younger viewers.

He then created the Pinnacle Puppet Theatre, which continued through to the 1980s.

Baker reprised the role of Deadly Earnest to present Horrorpalooza! at the St Kilda Film Festival in 2011.

Permanent link to this article: https://televisionau.com/2020/07/obituary-ralph-baker.html