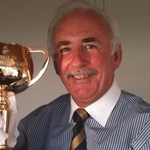 Rob Gaylard, former TV and radio presenter and prominent racing identity, has died suddenly at the age of 70.

He had been a sports presenter at BTV6 in Ballarat in the 1980s, later moving to National Nine News in Melbourne.

He also worked as a newsreader at Bendigo-based Southern Cross Eyewitness News when it launched a statewide bulletin following aggregation in 1992. When Channel 31 began in Melbourne in 1994, he hosted the channel’s Saturday night harness racing coverage. He continued in the role through to 2000.

He worked extensively as a host, MC and race caller for various racing clubs and was also a media consultant to the racing industry.

Rob Gaylard is survived by wife Karen and daughter Casey.

Permanent link to this article: https://televisionau.com/2020/07/obituary-rob-gaylard.html