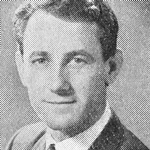 Former Adelaide newsreader Roger Cardwell has died at the age of 85. He was surrounded by family when he passed away at a nursing home on Saturday morning. He had long suffered from lung cancer.

Cardwell was a newsreader at NWS9 from the early 1960s, hosted the national Country And Western Hour and appeared in the channel’s Christmas pantomimes. In 1965 he made the surprise announcement that he was leaving Nine to join the new channel SAS10 as its main newsreader. After a few years at Ten, he then moved across to ADS7 to read the news and host country music show Country Style. He also appeared on local variety show Here’s Parry, hosted by English comedian Ron Parry.

In May 1969, Cardwell resigned from Seven, claiming a breach of contract after he was suspended from hosting Country Style.

He then worked as a guest presenter on ABC‘s Today Tonight in Adelaide before returning to Nine. While at Nine, in 1978 and 1981 he won the TV Week Logie Award for Most Popular Male Personality in South Australia.

in 1996 he was inducted into the Australian Country Music Hall of Fame in recognition of the part he played in pioneering country music on television in Australia. For 14 years he was also newsreader at Adelaide radio stations 5DN and 5AD.

Cardwell was also a familiar presenter and voice over talent on TV and radio commercials and recorded narrations for audio books. In recent years he also conducted book readings at a local Adelaide library.

Permanent link to this article: https://televisionau.com/2019/10/obituary-roger-cardwell.html