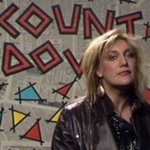 Every Saturday during January, Rage goes through (what’s left of) the ABC archives and digs out some retro treasures, this week including six Countdown episodes from 1980 through to 1982 and featuring guest hostings by Renee Geyer (pictured), Darryl Cotton and Jon English.

This week’s Retro Month playlist winds up with an episode of GTK from 1974, featuring English in rehearsal for the musical The Bacchoi.

Saturday morning 5 January:
10:00am
KATE BUSH Babooshka (EMI)
PINK FLOYD Another Brick In The Wall (Sony)
SPLIT ENZ I Got You (Fest/Mush)
THE PRETENDERS Brass In Pocket (Independent)
ADAM & THE ANTS Ant Music (Sony)
BLONDIE Call Me (EMI)
THE POLICE Don’t Stand So Close To Me (Polydor)
THE ROMANTICS What I Like About You (Sony)
TALKING HEADS Once In A Lifetime (Warner)

Permanent link to this article: https://televisionau.com/2019/01/rage-retro-month-countdown-gtk.html